Poppies Past and Present

Oh how nice it is to be back here again. I missed writing. I missed photography. I missed this part of my life. I have lots of new things to share on this blog, projects, crafts, gardening, our new house, you know, the things that make me smile. But while I was away for almost 2 months, I took a lot of pictures. So interspersed with the new stuff will be some of the photos and musings from April and May. Hope you like it. 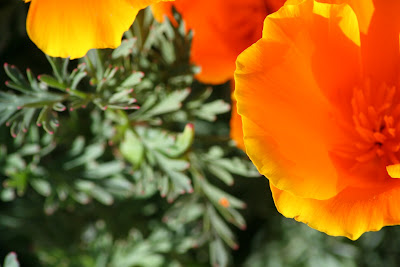 Across the street from the house I grew up in was a big, empty field. My brother and I spent countless hours playing in that field. There was no indication that anyone cared about it, and so we considered it ours. It was where my brother Ben and his buddies built their BMX track. It was where we played hide and seek, went exploring, and made secret forts. It was where I went to day dream.
Every season the field was different. In the summer it was dry, hot and burnt golden from the sun. I have since learned to appreciate the beauty of golden fields, but back then, the field in summer held little appeal for me. Fall was much the same, only cooler. It was after the rains of winter that I loved the field again. The grass would grow tall and green. It was like we had our own emerald hills of Ireland right there in Fallbrook. In the distance, the mountains were covered in snow and in between was the blue, blue sky. It was really lovely.
The best though, was spring time. The field was still green, and the grass was still long. But now the field held more loveliness. The poppies were blooming. Sprinkled across the field were golden California poppies. They were orange really, but golden sounds prettier. My most favorite days of all were the windy spring days where the grass and poppies bent and swayed in the wind. Those were the days when I would wander into the field by myself with a basket to fill with flowers and a head full of day dreams. 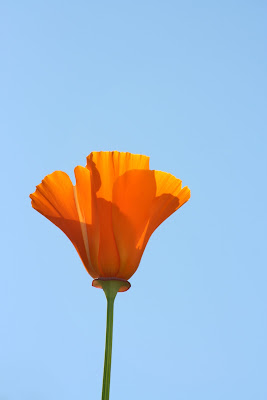 I spent a lot of time reading as kid. Some of my favorite memories of childhood are of the books I read. I still have many of them and have begun sharing some of them with James. I enjoy reading them now. They are like old friends. I often identified with characters in the books that I read. I wanted to be like these girls. Laura Ingalls, Caddie Woodlawn and Anne of Green Gables. Especially Anne. She loved beautiful things, She was spirited. She was romantic. She wanted to be a writer.
When I was out in that field, the wind whipping my hair around my face and the grass around my ankles, I could imagine I was somewhere else than my boring old reality. I wanted to be somewhere else, and for a few short weeks every April, that field was my somewhere else. It was easy to pretend I was Anne when I was up on that hill. Everything was as fresh and green as I imagined Green Gables and Avonlea to be. My romantic heart was filled by the beauty of those flowers, that sunshine, those moments. 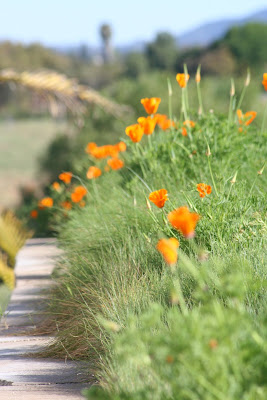 I can't see a California Poppy now without remembering those days. They are some of my favorite flowers. They help me remember the sweetness of my childhood, and the value of simple things like books, a place for imagining and the joy of being outdoors. I am doing my best to share these things with my own kids. So if they want to build a tepee out of sticks and an old sheet I'm all for it. A pile of logs becomes the campfire and sticks become spears to keep the bears and wolves away. 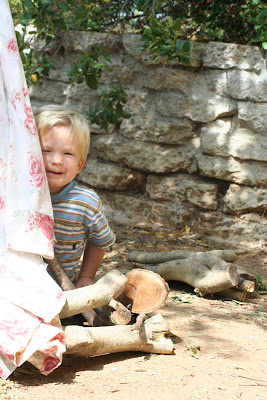 One of my favorite poems is William Wordsworths', I Wandered Lonely as a Cloud. If you replace poppies with daffodils, I think William and I are saying pretty much the same thing.
I wandered lonely as a cloud
That floats on high o'er vales and hill,
When all at once I saw a crowd,
A host of golden daffodils;
Beside the lake, beneath the trees,
Fluttering and dancing in the breeze.
Continuous as the stars that shine
And twinkle on the milky way
They stretched in never ending line,
Along a margin of a bay:
Ten thousand saw I at a glance,
Tossing their heads in sprightly dance
The waves beside them danced, but they
Outdid the sparkling waves in glee:
A poet could not but be gay,
In such a jocund company.
I gazed--and gazed--but little thought
What wealth the show to me had brought.
For oft, when on my couch I lie,
In vacant or in pensive mood,
They flash upon the inward eye,
Which is the bliss of solitude.
And then my heart with pleasure fills,
and dances with the daffodils. 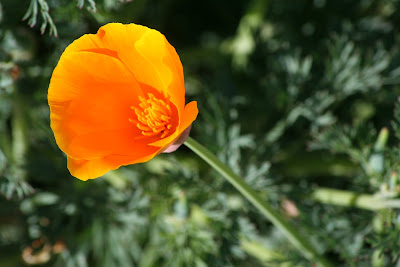 Posted by Greta at 7:44 AM
Labels: Books, Children, Creation, Moments

Glad to see you are back here! Missed your posts. It's so funny that you wrote about poppies. Every time I see poppies they remind me of a day you and I sat in that field by your house with our watercolors and painted them. It is one of my fondest memories with you.

Thanks for sharing that. I remember that day. I wonder if somewhere I have that painting. We were so artsy, weren't we? Uncool then, but so cool now! Well.......
Anyway, thanks for the comment, you made my day. I will be here lots more. My hard drive is full of pictures and my mind of ideas. I have lots of material! Thanks for checking in.

good to have you back! I wish I could get back in the game too! oh well! I will just keep reading yours until I find my way!

Yea, I think I still have some of my old paintings in storage. I gave up on drawing and watercolors long ago. The artist in me hasn't gone away, just had a change of medium. :)