In 1984 the San Diego Padres went to the World's Series. It was a great time for Padres fans. Which we were in our house. Staunchly loyal, through good years and bad.
But 84? Oh yes, it was a good year.
We didn't have a tv growing up, but at that time my grandma was living with us and dad didn't deprive her of tv like he did the rest of us. So we'd huddle in her little bedroom upstairs, around her tv and watch the televised games. I still remember one of the games in the pennant race when Steve Garvey hit a critical home run. We screamed and yelled and my dad threw me up in the air so high my head hit the ceiling.
That Steve Garvey. He was my favorite. I loved him. He left our bitter enemies, the Dodgers, and joined the Padres. I desperately wanted his autograph, or even better yet, to get a letter, written and addressed to me, from my favorite first baseman. (at least I think he played first)
So I devised a plan.
One exciting night we got to go to a Padres home game at Jack Murphy stadium. We arrived early and Dad, Ben and I headed down to the dug out to call out players names, begging them to come sign our hats and balls and autograph books. I, of course, called Steve.
And he came. I held out my hat for him to sign (I still have it) and when he handed it back to me, I gave him a letter. He looked a little surprised.
"It's for you," I said.
"Well. Thank you. Thank you so much." He smiled at me and put my letter in his back pocket.
I was thrilled.
I am no longer clear on all the details of that letter. Except for one part. The song.
Yes. I wrote Steve Garvey a song.
And I put it in the letter. Not that he'd be able to know exactly that it was a song, except that it said, "Here is a song I wrote for you." Really it would read more like a poem. A poem by an 8 year old. It's not very good.
I still know every word and the tune that goes with it. I could even sing it for you. But you'd have to make it very worth my while.
Throughout the rest of the game, everyone made references to my letter in Steve Garvey's pocket. When Steve was on third and Carmello Martinez was up to bat, my dad shouted, "Greta! Did you see that?"
"What, what?" I asked.
"Steve Garvey just called Carmello's name and then he patted his back pocket. Where your letter is. Just watch. He'll do it again."
He did it a lot through the rest of the game. I missed it every time.
Steve never responded to my letter. Even though I did put my name and address in it. But it didn't really matter. It was enough to know he put my letter in his back pocket. I do hope he read it and knew that some little 8 year old girl thought he was just the best.
I kind of felt like I was reliving the whole Steve Garvey incident when I saw Molly. I don't mean to sound like a freaky stalker, or an 8 year old girl with a crush (though that is the better of the 2) but it was really, really cool to hear Molly talk about her book and her blog and to see this person whose writing I read every week, whose recipes I try and who helped me begin this blogging thing I do that is now a hugely important part of my life. (wow. That sentence is a paragraph)
She gave me my voice. It was always in there, but she helped me find a way to get it out.
So yeah, it was a big deal.
She began by reading the first chapter of her book. Which I love. It is sweet and poignant and dear and moving. I cried. I am a pretty harsh critic of books, and I love her book. Her writing speaks to my heart.
She talked about her blog, her book, the restaurant she and her husband have opened in Seattle. I felt just like I do when I read her blog--that she is a girl I'd like to be friends with. She was great.
After the questions, they set up a table and she signed books.
When it was my turn, I smiled, handed her my book, and a silver envelope.
"This is for you."
"Oh thank you! How sweet." Or something like that.
And I felt just like I was 8 again. Really, very, very dorky.
But you know what? I had to tell her that I think she is the best.
And I like to think that she doesn't mind hearing that.
I really wanted to ask to take a picture.
But I chickened out. 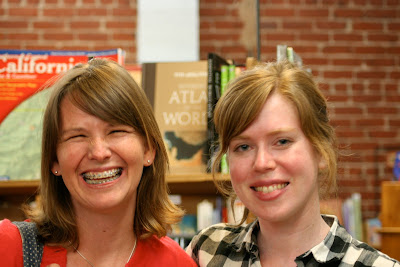 Then I went back.

I waited until the line was gone. I swallowed my pride and summoned my courage.
"I'm back." I said. "Can I get a picture with you?"
She didn't even look, not for 1 second, like I was a weirdo. She just smiled an said, "sure."
Thanks Molly.
Greta
PS. I owe my courage, in part, to Aaron. Several years ago he went to the Sundance Film festival with our friend, Brian. One night at dinner, he saw one of his favorite actors, James Coburn. Aaron couldn't believe his eyes. He wanted so badly to speak to him, to shake his hand and say, "I really like your work." But he didn't. Everyone at his table said no, don't do it, leave him alone, people don't do that here. Blah, blah, blah.
He really wishes he would have.
I remembered that.
So I did it.
And really, who cares any way? I am sure we all think about ourselves far, far more than anyone else does. So, don't be afraid of what other people are going to think. Risk feeling a bit of the dork and go for it!
If nothing else, it will make a good story.
PSS. For my enite life I have been made fun of for my eyes when I smile. Now you know why.
Oh, and one more thing. Strawberry short cake recipe is on it's way. just in time for Easter. See you soon!
PS.  You can read part 1 here.
Posted by Greta at 11:34 PM
Labels: Books, Favorite Things, Moments, Thoughts

Oh, so cool that you got to go and meet her and hear her read! I really enjoy her blog and will have to check out her book. I love love love that you gave her a letter. That's so you, and I love that about you!

Oh,so happy that you got to go and meet her. I realy enjoy her blog and I'll have to pick up her book. I love love love that you gave her a letter. That's so you and I love that about you =)