What do you do when your mom gives you 10 eggplants, fresh from her garden? 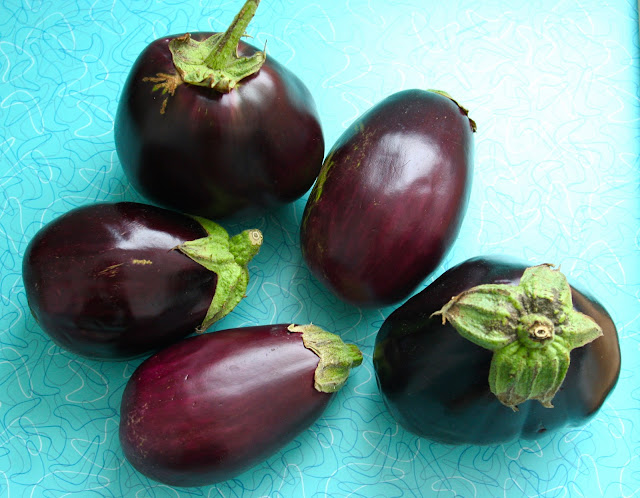 You make ratatouille, of course.


I'm not talking about the movie with the rat who wants to be a French chef.
This is a real dish and might just be my husband's favorite meal.
Mine too.
I am not exaggerating when I say it's the world's best.
I've been making this ratatouille for about 7 or 8 years; long before the movie came out and most people heard of ratatouille for the first time.
I loved it before it became famous.


I saw the recipe in a Martha Stewart magazine and it looked so good I had to try it.
I followed the recipe religiously and it came out great.
The next time I made it, I changed it a little.
7 years later, most of the main elements remain the same, but I have given it my own twist and I think it is even better than the original.
It is definitely easier.
And that's a good thing.  (sorry Martha.  i had to)


The thing that sets this recipe apart from almost all other ratatouille recipes that I have seen is that before you stew the veggies, you roast them.
Roasting the eggplant and zucchini gives them so much more depth of flavor than simply stewing them.
It brings out the sweetness of the vegetables.
It makes all the difference in the world.


To prep the eggplant and zucchini for roasting, chop them into a large dice.
Mine were 1 inch squares all around. 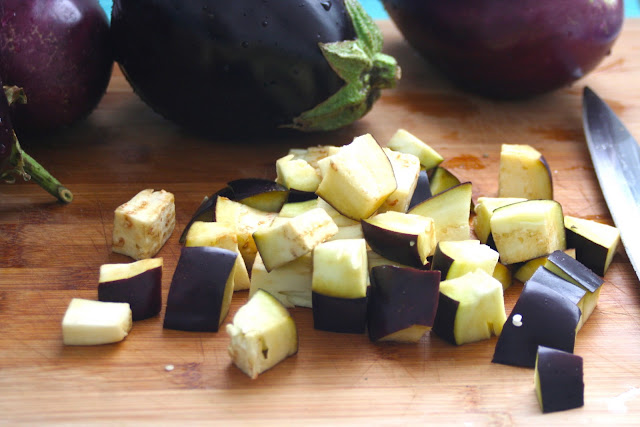 Remember, when you roast them they will shrink up quite a bit, so you want them big to start with.
Also, if you cut them too small, they will cook too fast and not develop that rich sweetness you're looking for. 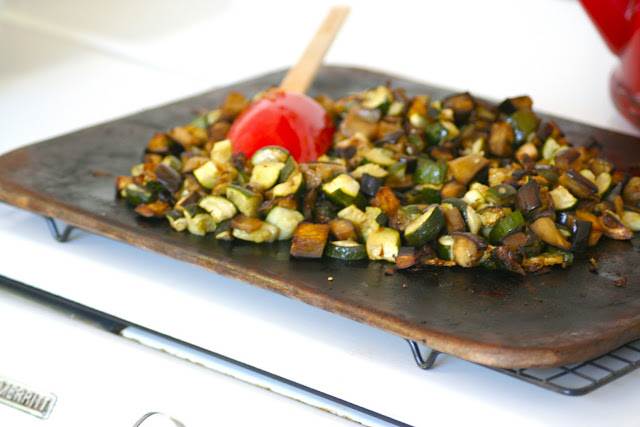 You should also roast your own peppers.
It isn't hard at all.
The original recipe called for holding each pepper over the flame of your gas grill or bbq.
I tried that.
It took forever.
And a day.
I'm a mom with 4 little kids--I don't have forever and a day.
Or even a day.
So, I solved the problem by putting the peppers on a rimmed cookie sheet and roasting them in the oven.
As each side turns black, I turn the pepper until all the sides are black.
This takes seconds instead of long minutes.
When the whole thing is black and the skin is like paper, I pull it out of the oven and plop it into a bowl.
I then cover the bowl with plastic wrap and let the pepper steam for a good 10 minutes at least.
When it's done steaming, you take it out of the bowl and the skin almost falls off in your hands.
Easy.
And way better tasting than store bought roasted peppers.
There is no comparison, really. 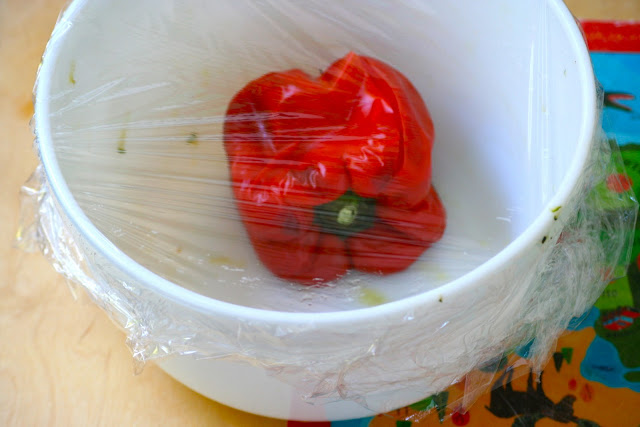 For the tomatoes, though, I take a totally different approach.
I used canned.
Gasp.
Yep.
First time I made this ratatouille, I peeled, cored, seeded and chopped fresh tomatoes.
And then I said, "never again." (that's why I used this recipe for my tomato soup)
If you have ever peeled, cored, seeded and chopped fresh tomatoes, you know what I mean.
It takes forever.
And a day.
Or maybe longer.
Being a mom of 4 and all, I opted for the easy way out.
There are some really good canned tomatoes out there, so you don't have to worry about these tomatoes spoiling your ratatouille.
I like to use fire roasted tomatoes, but you can just use regular if you want. 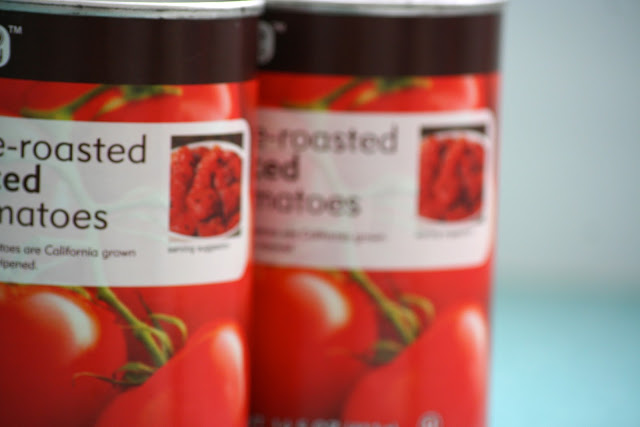 After you have roasted your veggies, sauteed the onions and garlic, then you pour everything into one pot.
You let it just simmer for 30 minutes, or much longer if you want.
It just gets better the longer you cook it. 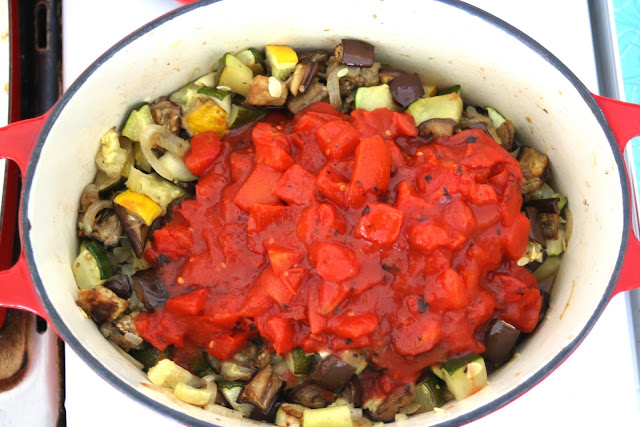 It will all come together in one brownish mess.
Ratatouille is not the prettiest dish.
The roasted egg plant and zucchini kind of make it a rather drab looking dish.
But I promise, the taste is divine.
Truly.
Divine.


Some people like to serve their ratatouille as a side dish alongside roast chicken or grilled fish.
But I like to serve it as a main course.
With some good shaved Parmesan on top. 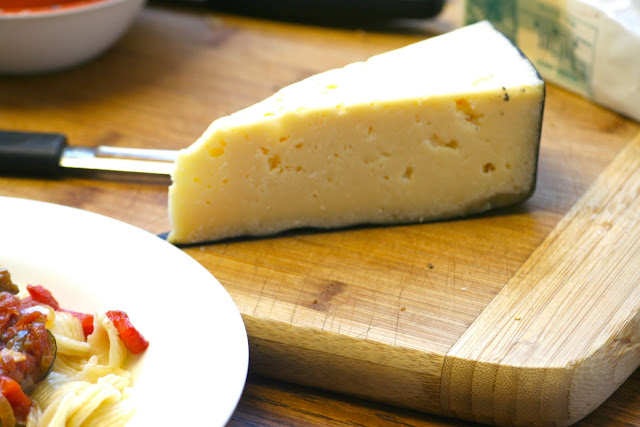 And pasta underneath.
It is really the best ratatouille you'll ever eat.
Did I say that already? 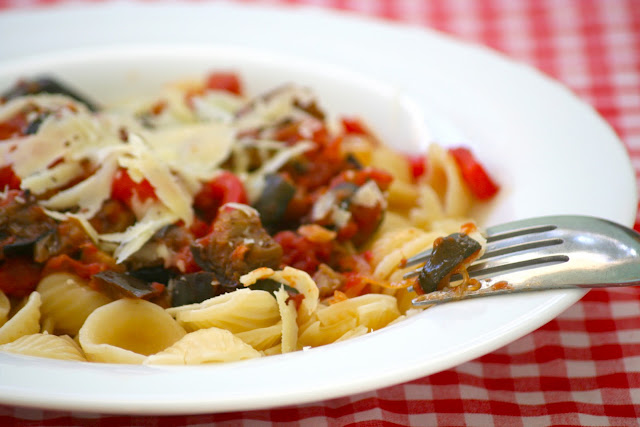 Besides serving it alongside meat or over pasta, it also makes a fabulous topping for pizza.
Or you can grill some crostini and put a spoonful of ratatouille on top.
It makes a great sandwich with some fresh mozzarella and some fresh basil.
I even like it for breakfast, warmed, with a poached egg on top.
I'm not kidding,
The creamy yolk, mingling with all the juices from those roasted vegetables and tomatoes?
It is one of the best breakfasts ever.
In the world actually.
Try it and see.
And if you do, tell me.
I'd love to know who else falls in love with this dish.
Bon Appetit!
Love from,
Greta
Roasted Vegetable Ratatouille
adapted from Martha Stewart
serves 4 (with leftovers)
Time: From start to finish this recipe takes a while.  But aside from the initial chopping, you don't have to be there for all of it.  A lot of the time is roasting time or stewing time.  Don't start it an hour before dinner.  Start it early in the afternoon and then you'll have plenty of time to relax before dinner.  All you'll have to do is put the past on to boil.
2 large eggplant  cut into 1 inch dice
4 med zucchini  cut into 1 inch dice
2 med yellow squash  cut into 1 inch dice
2 sweet bell peppers 1 red and 1 yellow  roasted, peeled and cut into thin strips
1 med to large yellow onion  cut in half and then sliced into "half moon" slices
2 cloves of garlic minced
2 cans diced tomatoes
olive oil, salt and pepper to taste
your choice of fresh or dried basil, oregano or thyme
Preheat oven to 400
Place eggplant and zucchini in a single layer on rimmed baking sheet.
You will fill more than one baking sheet.  Be prepared to roast multiple batches.
Drizzle vegetables with olive oil and sprinkle with salt and pepper.
Stir to coat with olive oil
Place in oven to roast for about 30 minutes or until vegetables are very soft.
Sir occasionally while roasting.
Place peppers on a rimmed baking sheet and place in oven.
As each side of the peppers get blackened, turn the pepper.
Continue to do so until all sides are completely black.
Remove peppers from oven and place in a bowl.  Cover bowl with plastic wrap.
Wait at least 10 minutes before removing peppers from bowl.  The skin should come right off of the pepper.  If not, place back in bowl and wait a bit longer.
After peeling, remove stem and seeds from pepper and slice into long, thin strips.
In a large, heavy-bottomed pot, cover the bottom of pot with olive oil.
Add onions and garlic and cook on medium-low until golden and onions are soft.
Add zucchini,, eggplant and peppers.  Stir.
Add tomatoes.
Stir and simmer for at least 30 minutes.
Season ratatouille with salt and pepper to taste.
If you'd like, add fresh basil, oregano or thyme to individual servings.
Or, season with dried herbs to taste.
Posted by Greta at 5:54 AM
Labels: Food, Gardening, Recipes

I love ratatouille! It will always remind me of my college days at UCSB; I worked in the DLG cafeteria and we always served it. Sorta weird choice for a bunch of college kids, but since then my tastes have grown up quite a bit! :)

Hi! Met you at Blog Sugar.
Love your blog, and how you have drawn in all the things you like into one place.

And this looks delicious! I am not a cook at all but I might have to give it a try. :)

It was great meeting you yesterday!

Excited to try this out! I have everything in my kitchen, sounds delish..hopefully this will turn my husband away from his eggplant hating ways ;)