Home Made Pie Crust and Rhubarb Pie Too!

One of my life goals is to become a maker of pies.
And by maker of pies, I mean maker of great pies.
I also mean a maker of whole pies--from the crust up.
How many people make pies these days?
If anyone bothers to bring a pie to an event, it's nearly always from some "pie shop".
Marie Calendar's or some such spot.
Now I'm sorry if I offend you here, but those pies are just not as good as the real thing.
You know I'm right.
You might not care enough to want to make the real thing--pies from scratch--but you still know I'm right.
I think from scratch pies are a part of our history.
America and apple pie?
See what I mean?
Also, homemade pies are nostalgic, and romantic, and I have a stove with a pie rack built into it.
It all adds up: I just have to master pies.

This was my first attempt.
I almost quit.
If you are tired of reading blog posts where everything turns out perfect, to the point where you want to reach your fist into the computer and punch the blogger in the face because she makes everything look so beautiful, then this post will make you feel better.
By the same token, if you want to feel superior because you already are a pie master, and you kind of want to laugh at my sad attempts, then this is the post for you.
Or, if you are like me, and you read a blog post where the author makes it look so easy that you get over confident and think, "heck YEAH I can do that!", then this might take you down a notch.
Which you might need.
Whatever spot you find yourself in, go ahead and take a look at my first from scratch pie.

It all started because the peaches on our tree all ripened at exactly the same time.
Well, 17 of them.
Peach pie made with peaches from our own peach tree sounded incredibly romantic, and 50s domestic, and farmerish, and all sorts of other things that I love, so I knew now was the time to start making pie.
But I decided to start with  rhubarb.
Because it is Aaron's favorite.
But mostly because I didn't want to mess up the pie, and waste those peaches before I really knew what I was doing.
I did some research to decide which method I'd use for my crust.
I read recipes from all my favorite cooks, and looked at the file of magazine clippings I've been saving for years.
In the end I went with this tutorial because it just sounded so easy and doable.
Also, I am a fan of using the food processor to mix dough. 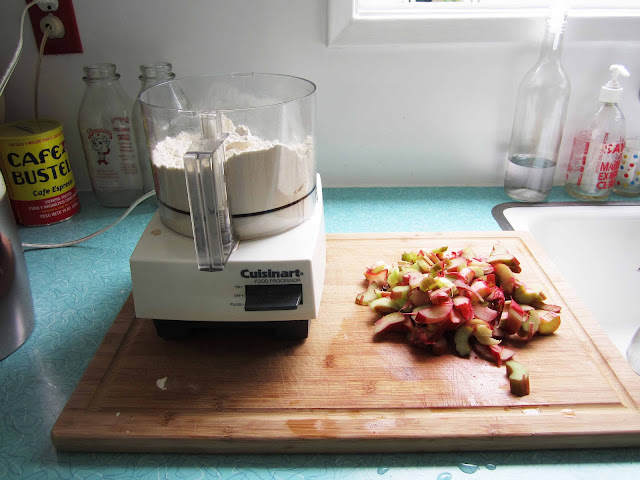 I did have to stir it a bit with the wooden spoon.
But it wasn't bad. 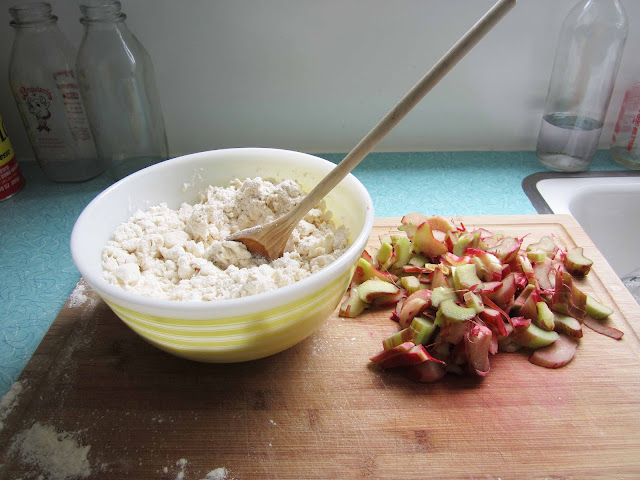 Then I followed the directions to make a pie crust that doesn't stick to the counter, and doesn't use tons of flour, therefore becoming dry, stiff and tasteless.
I put my disk of dough on parchment paper, sprinkled it with a bit of flour, placed another sheet of parchment paper on top, and rolled.
It didn't work.
I tried not to curse. 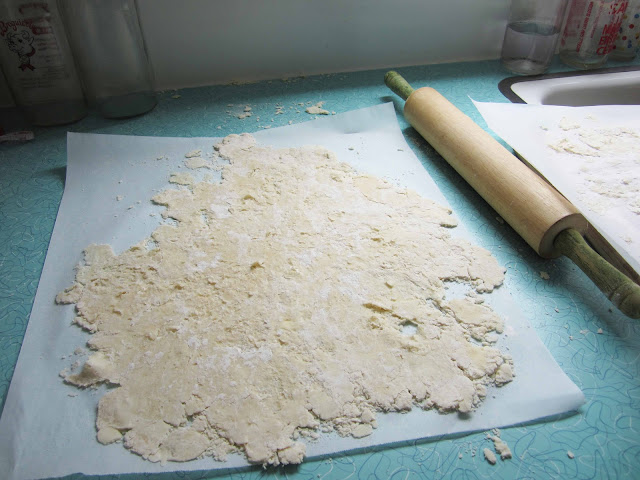 The pictures on the website looked very different than my "crust".
No fair. 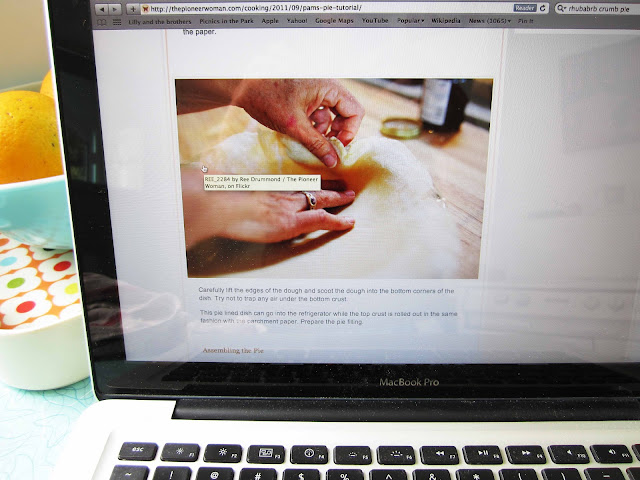 Luckily it was a recipe for 2 pie crusts, and since I was making a crumb topping, I could use my other crust.
I added a touch more ice water, a touch more flour, and tried again.
It was slightly better.
I flipped it off the parchment into the pie pan and the proceeded to patch up the holes.
How's that for a perfect pie crust?
Bahahahahahaha!
It's embarrassing, but I am not going to fake it with you people.
Pie masters out there, now's your chance to feel superior. 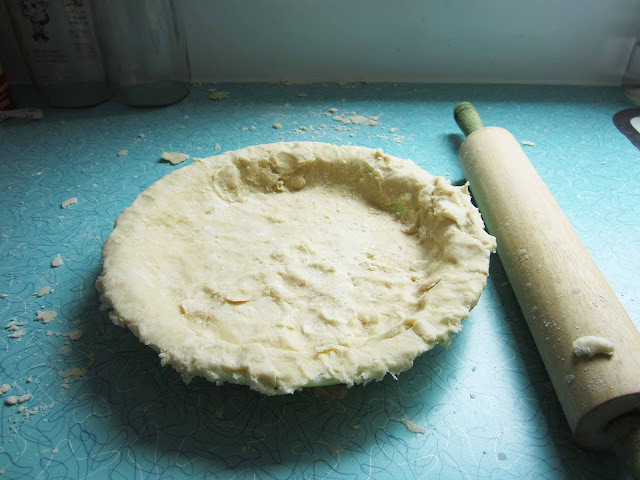 I then filled my pie with the rhubarb filling.
I dotted it with butter because butter covers a multitude of wrongs. 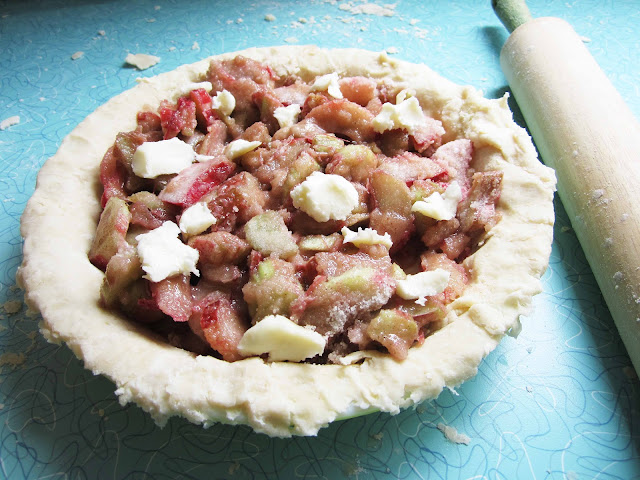 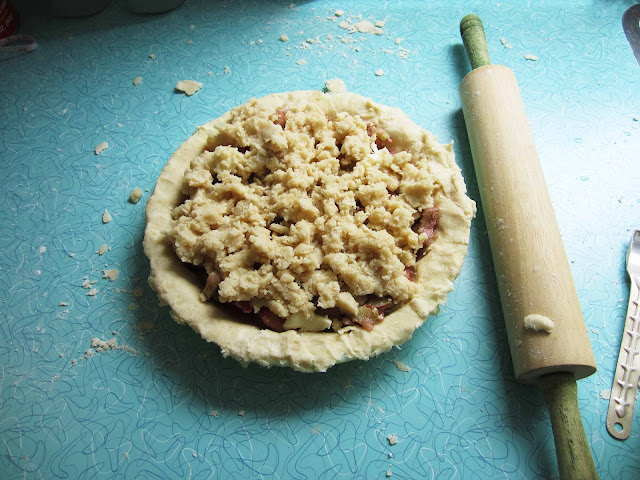 I popped that bad boy in the oven and waited.
Soon my kitchen was filled with intoxicating smells.
This is what pie making is all about!
About 45 minutes later, this came out. 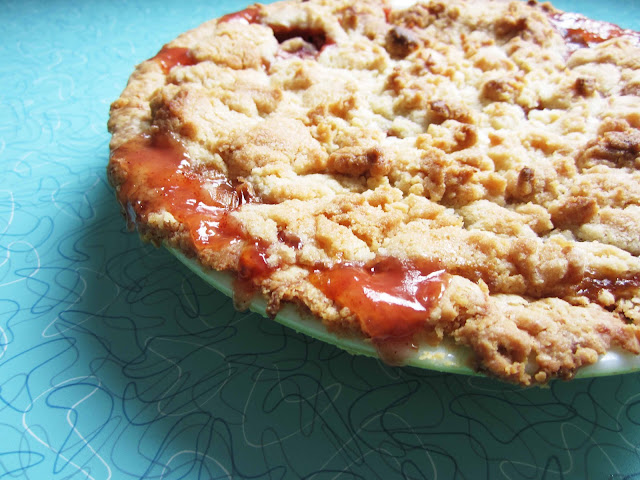 It was warm, bubbly, gooey and smelled delicious.
I let it cool a bit.
Then, before I took it out to share with the neighbors, I sampled a piece.
If it was horrible, I wasn't sharing.
It wasn't horrible.
The rhubarb filling and the crumb topping were DIVINE.
I'm pretty sure there were some fireworks going off when I took my first bite, and it was only 2 o clock in the afternoon.
The crust was pretty good.
It could have been a bit more tender.
It could have been a bit more flaky.
But it wasn't too bad for a first attempt, and it was better than Marie Calendar's.
I wasn't ashamed to share it with the neighbors.
In fact, I kind of wanted to keep it all to myself.
But I didn't.
And I'm sorry for these bad pictures--I was hurrying and using a point and shoot.
It tastes better than it looks. 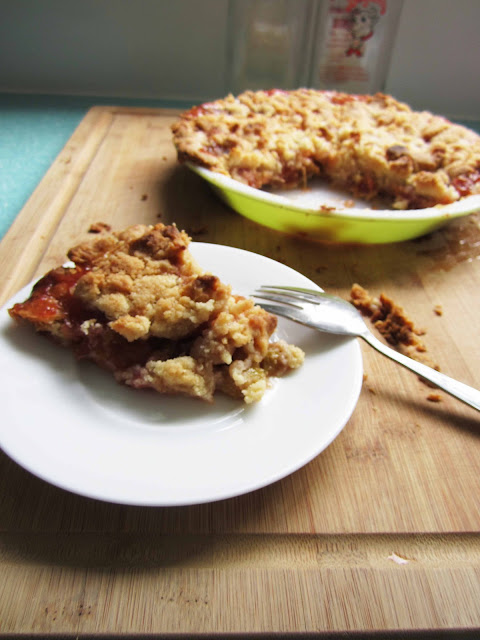 I'm far from a master pie maker, but I am starting on the adventure.
I'm hooked.
I am going to experiment with lard (leaf lard--google it and you'll find a whole world of pie crust geeks you never knew about.  or maybe don't want to) and double crusts, and savory pies, and cream pies, and maybe even lattice crusts.
I'm going to have to start marathon training too, or else I will become as big as a house.
Dang, I love pie.
Here's hoping your weekend is wonderful and maybe finds you enjoying a piece of pie!
Love from,
Greta


Greta's Rhubarb Pie (inspired by several different recipes)
For the crust recipe I used, go here.  (or tell me about your favorite crust recipe.  I want to know your secrets)
For the rhubarb filling:
4 cups of fresh rhubarb, sliced 1/ 2 inch slices
1 1/4 cups sugar  (I like it sweet)
2 tablespoons cornstarch
1/2 teaspoon cinnamon
1/4 teaspoon nutmeg
Juice of 1 lemon


For the Crumb Topping:

Mix all filling ingredients together
Pour into pie crust
Dot the filling with butter
Cover with crumb topping
Bake pie for 45--55 minutes and the filling is bubbling and the crumb topping is golden brown.
If the crust is getting too brown during baking, cover it with foil and continue baking.
Let pie cool on a rack before serving.

oh yes please and do share it all! Loved that post and maybe I should try again, too... last time is a while ago. No such thing as pre made crusts over here so I'd be forced to do my own anyway. But I looooooove apple pie... well, you got me hooked so I'll add this to my list of things to master as well. Not expert maybe, just a decent American apple pie will do. But then again I don't have a peach tree....

Looks better than my first pie ever did!! Good job!

I too aspire to be an old fashion pie baking diva! I'M sure it was amazing!

I'm one of those people that brings the homemade pie to a party. I think yours looks great!

Oh my goodness this looks so delicious!! What a gorgeous crust.

Hi Greta. Thanks for converting my family to loving roast veggies with your cauliflower recipe.

I am a good pie maker. Long ago, I worked as a baker at a little mountain roadside restaurant, and was trained by someone great on making pies, biscuits, and muffins. For pie crust, keep everything COLD. I use palm shortening that I buy from Smart and Final. It gives all baked goods a good texture and golden color. Mix up flour, plenty of salt, and shortening (or whatever fat you are using). Mix more than you need in case you have problems. In a chilled glass pyrex measuring container, put ice water and 1 TBS of vinegar.

Next, take a clean bowl and scoop into it a baseball sized clump of the flour/salt/shortening mix. Dribble some of the icy water and mix with your fingers until it is clumping well and you can make a ball. Flour your counter, roll out, use a scraper to fold in fourths, and transfer to your greased pie plate.

Any left over mix or trimmings, roll out, dust with cinnamon and sugar and bake. Yummy.

You will get the feel of it. Try the vinegar - it makes the dough more elastic and I like the savory crust for sweet or savory pies.

I make six or seven at a time and freeze the extras. Then, you can make up a keish and a pie easily for a company dinner or something special.

Excellent job. Stumbled upon your blog - what a lovely site. I think you are so right that being able to make pie, from scratch, is a wonderful skill. Everyone loves pie. It's perfect for sharing and the variety is endless. A few years ago I made this tart from a french cookbook with a creamy almond filling and apples, served with cream. My girlfriend still talks about it. I felt very very proud.