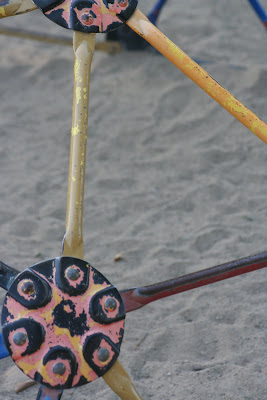 Do you remember these?
The dangerous, slippery, bars with the big metal bolts exposed so you could rip a hole in your knee if you made a wrong move. 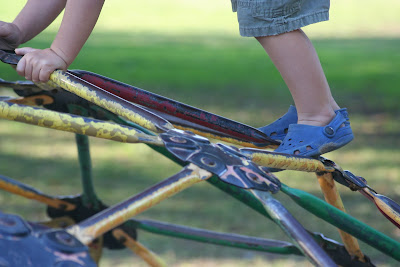 Do you remember how good it felt to climb to the top?
Suspended in the air, supported but not. You felt brave and daring, but still safe. 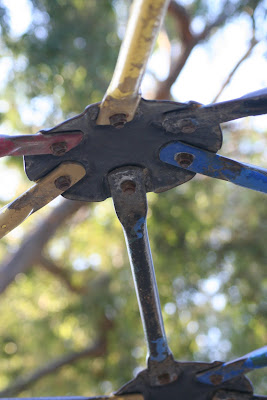 Did you ever swing from the top and let go?
Did you drop to the sandy bottom and look up, marveling at how far you had fallen. 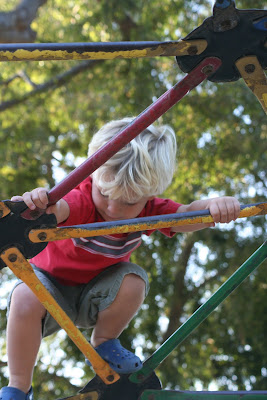 We like to play Hot Lava Monster on it.
That was a sort of tag played while climbing around on the jungle gym, and if you fell off you were in the hot lava and became the monster. At least I think that is how we played.
It has been a while. 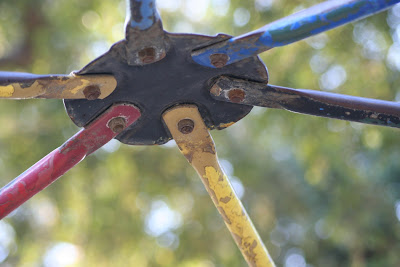 There was a huge jungle gym at a school near the house I grew up in. Fallbrook Street School. Oh how we all loved to climb on it. Schools weren't locked up then, so we could go climb it anytime.
It was the biggest one we'd ever been on. Climbing all the way to the top was kind of scary.
I wonder if it is still there?
I wonder if it is as big as I remember?
What is your favorite playground memory?
Posted by Greta at 12:01 AM
Labels: Children, Favorite Things

Kennedy and I were just talking the other day about the big metal merry-go-rounds that playgrounds used to have. There was a monster one at Live Oak Park - probably gone now. Those were so much fun, but now that I remember how fast kids tried to get those going and how many got hurt trying to get on and off while it was spinning, and sitting on top of the metal bars... I would probably be a nervous wreck watching my child on it.

Oh yeah! That merry go round was the greatest! We used to go soooo fast on it. And we'd sit on the top of those bars you were supposed to push with and then fall over upside down while it was spinning. My brother and his friends would also hang from them and drag thier legs in the dirt while the it was spinning around.
It was so much fun.
And yes, it's gone now. :(

My favorite playground memory is about swinging on the tire swing (the kind that lays horizontally) with my cousins. We would hog that thing for at least an hour pretending to be lost at sea or whathaveyou. As easily dizzied as I get now, it's a wonder I was able to last a minute with them.

I think I shall call those girls tomorrow morning :O) Thanks for the lovely memory revival.