Sorry I missed posting today. Late night, long day, no naps. You get the picture. But I am offering up double posts to make up for it. So enjoy!
I have been struggling with activities that work for all 3 of my kids at the same time.
5 and half, 3 and a half, 1 and a half.
It's the little one that's the problem. She wants to do everything her big brothers do, but she can't really. Unless I give her quite a bit of help--which she wants nothing to do with. And so, there haven't been many 3 kids projects going on around here.
The boys have been asking for play dough. But Lilly eats it. So we only do it when she is asleep. However, like I said, I am trying for activities for all 3 together, so I thought I'd give play dough another chance.
Of course I came up with a brilliant plan: edible play dough.
It would solve all my problems. And there would be peace on earth.
Yeah. It didn't quite work out like that. 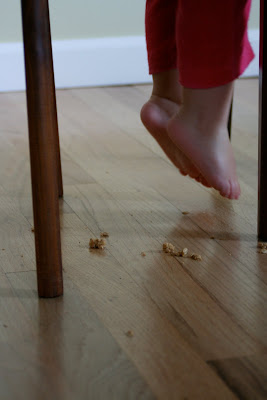 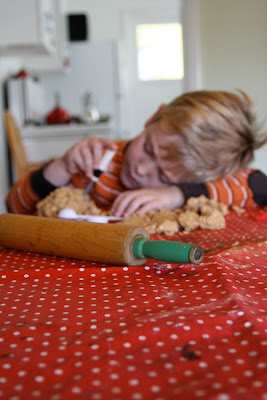 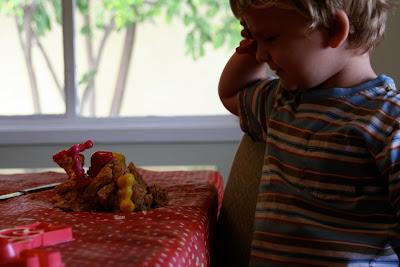 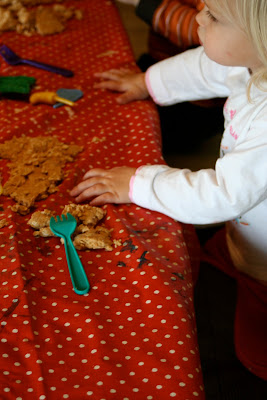 Oh brother.
So edible play dough is not going to be in the rotation of kid crafts again any time soon. If I did decide to do it, I might leave out the oatmeal the recipe called for and see if that makes it less crumbly. I do have a jar of cheap peanut butter and half a bag of powdered milk left, so I want to try it again.
But not till spring when we can do it outside. And the ants can have a blast with all the crumbs.
Here's the recipe if you want it. It might work out better for you than it did for me.
Edible Play dough:
2 cups smooth peanut butter
2 cups rolled oats
2 cups dried milk
2/3 cup of honey
Mix all ingredients in a large bowl until thoroughly combined. Store in an airtight container.
A couple of weeks later, we were stuck in the house during a week of rain. The boys wanted play dough again. Before I told them to go jump in the creek that was running down our street, I decided to make our regular old salt play dough.
We just didn't give Lilly any food coloring in hers. 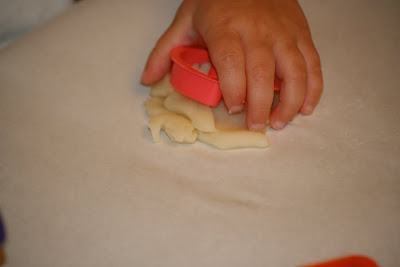 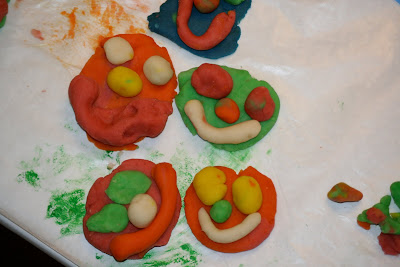 But the boys made their dough very bright.
And true to form, Lilly ate her dough--1 cup of salt and all.
I love this play dough. It is fun to make. It is fun to add color to. It is fun to play with. It lasts a really long time.
It is way better than store bought play dough.
Here's the recipe:
Combine 1 cup all purpose flour, 1 cup water, 1/2 cup salt, 1 tablespoon vegetable oil, 1 teaspoon cream of tartar in a heavy pan over medium heat.
Stir as the mixture thickens.
When it comes together as a dough, remove from heat.
When dough is cool enough to handle, add food coloring to dough and knead in.
Store in an airtight container.
Make some with your kids--I suggest the salt kind--but that's just the slightly neurotic house cleaner in me!
Have fun.
Posted by Greta at 7:20 PM
Labels: Crafts, Recipes

Hahaha... I would have looked at the ingredients of peanut butter and honey and could just imagine the stickiness. Really, Greta, what were you thinking with this one?! :) You are a more experienced mother than I am. I'd have thought you'd spot the problem with this recipe from a mile away!

Weeelll, I was just so pleased with myself for figuring out a way to include Lilly that I didn't think about the sticky factor at all. And I also figured it would be contained to the table, which I cover with a vinal tablecloth anyway. It was the "crumbs" falling all over the place that was the real problem.
Live and learn, right!

heck Greta Why don't you just make a no bake cookie dough and that way you all can enjoy your creations? Or bake cookie dough and design them for an hour or so and them bake what you got! that sounds more fun and tasty to me! but I am not a mother yet or a clean freek so who know how it will work? But it did look fun and well it did entertain for a while! Love you!