Simplifying My Life: Organizing the Legos

Do you ever want to get rid of all your stuff? Do you feel like it is just weighing you down, piling up in the closets and drawers of your house and doing nothing for you? I do.
Even though we've moved twice in the past 2 years, it still feels like we have way too much stuff. I thought we got rid of a lot of it. And I thought I was pretty good about not letting a lot of junk pile up.
But my closets and our garage tell a different tale.
I am aiming for simplification. I am aiming for things having a place and being put in their place and not having to reorganize every month.
Sometimes it takes a bit of time to achieve such lofty goals.
Especially when you are dealing with Legos.
Lots and lots of Legos. 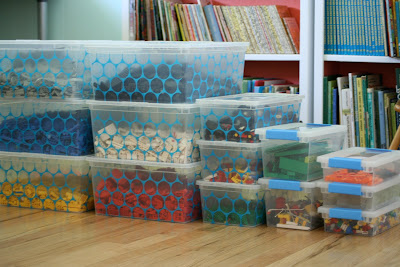 My husband had a lot of Legos as a kid. More like a ton, really. They were stored in 2 huge tubs that he brought home from his parents' garage one weekend.
The tubs were so deep and full of Legos, that only the ones on top were accessible for play. So most Legos were never played with.
I am not a big fan of Legos anyway, all those little pieces to be strewn about, stepped on and picked up, but this big mess was killing me.
When Aaron suggested we organize them, I sprang into action.
I asked for advice on separating them, knowing that a true Lego aficionado would care. He did.
They were organized by color, 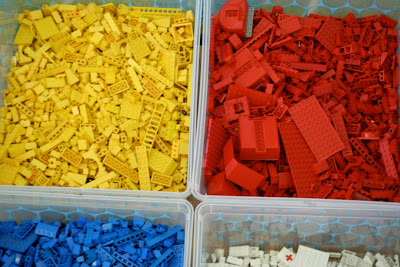 or by specialty type. 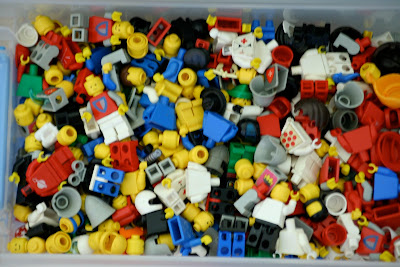 The many plastic bins we use fit nicely under the long table in the school room and the boys have constant and easy access to them. 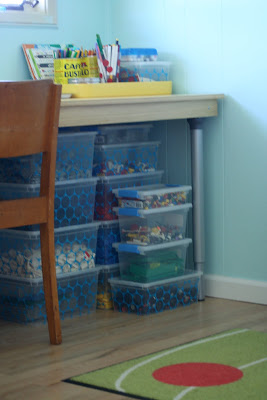 It took me quite a few days and evenings to finish this organizing project. But it was worth every minute. For 2 very good reasons.
1. The Legos now have a place where they belong. It is easy to put them away because they have a place. It is a simple concept. And I love it.
2. The boys have discovered all sorts of Legos that they never knew they had. Like these little flowers, which are stored in the "park box" and have been pulled out and played with many times since they were found. 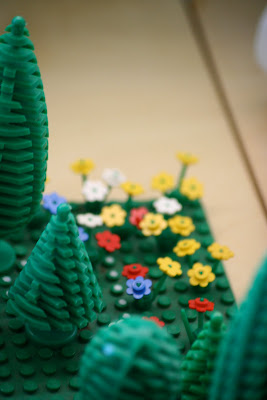 It;s just a little thing, but organizing a corner of my home feels really good.
Now I need to tackle the closets and the garage.
I really need to simplify in there.
How do you organize the things that are driving you crazy in your home?
Love from,
Greta
Posted by Greta at 11:02 PM
Labels: Home Keeping, Simplifying

Wow, your collection rivals my husbands! When we first met at 19 he still had lego castles built in his room haha, I kid you not! :) We use bins, just like you. bins give my life order and bring sense of peace to my world. Bins have changed my life, at least my life in terms of organization :)

Love it! We use bins too. I bought a bunch of the big three drawer tupperware shelves for their toys.
We've got all the Legos + the Bionicles that we get to continuously sort and seperate. My problem is not the getting organized. It's the keeping organized!
Loved seeing the order in your pictures it was very soothing.
Betsi*

I love storage solutions. I am currently organizing my garage. It is a big giant dusty mess. Things everywhere. The first thing I did was hire someone to put up drywall and paint the walls. Now I am putting together chrome shelving units from Costco that roll on wheels. So nice to be able to move the units if necessary. On the shelves will go all the bins. Then I may put up some Flow Walls. Whoever invented that system is brilliant. Go check it out!! http://www.flowwall.com/Flow_Learn_Intro_Costco.php