I meant to get this out last week.
But you know how that goes.
At least for me.
Anyway, this is my last post about the diorama party.
And this isn't really about the dioramas, but just a fun extra I tacked onto the party.

I wanted to give out awards to all the participants at the party.
I wanted there to be voting, I wanted there to different categories for voting, and I wanted awards that were tongue in cheek.
So I spray painted some trophies.
You could use these trophies for lots of other occasions where you want to give out awards that are a bit silly.
You could/should also use them for a kid party sometime.
They are a big hit with the kid crowd.
What kid doesn't love a trophy?
So here goes:
Homemade trophies and voting ballots--a how-to.

Making the Trophies
The trophies themselves were very easy to make.
The hard part was finding the trophies in the first place.
I called some thrift stores first and they all made it sound like I was a bit crazy when I asked them if they had any old trophies.
"No," they said emphatically, "they did not!"
I thought I'd go with another award until James saw a bunch of these at this place.
I wasn't sure how I'd make just the trophy tops work, but at 25 cents apiece, I knew I had to try.
(I was wondering why just trophy tops, and my friend surmised it was because of the kid's names on the trophies.)
Step 1.
We picked out a random assortment of trophy tops, came home and laid them out for spray painting. 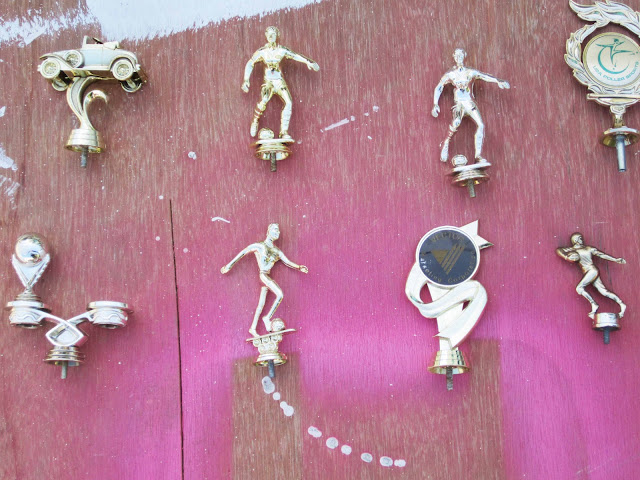 Step 2.
I primed the trophy tops.
I always, always prime with the gray, spray paint primer.
It makes the color coat go on so much better. 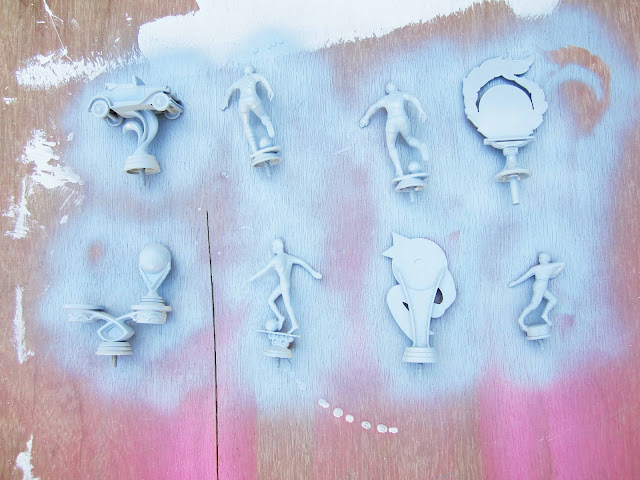 Step 3.
I added color.
Once the primer coat dried, I sprayed the trophy tops and with the assortment of colors that we had on hand.
The kids were taking these trophies very seriously and wanted them all to be gold.
But since I was going for the tongue in cheek look, I went with color.
Also, some did have writing on them and I wanted to cover that up.
Mostly though, they just looked way more awesome when they were sprayed up. 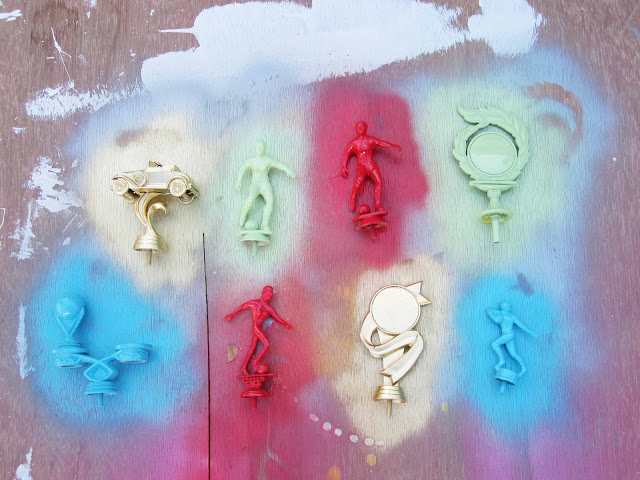 Step 4.
I made bases for the trophy tops.
I wasn't sure what to use for the bases.
Cutting wood blocks and then drilling holes into those blocks was way more work than I had time for.
Instead I bought some large pieces of Styrofoam in the florist section of Michal's.
I cut it in squares, and spray painted each square to match its trophy top.
Step 5.
I attached the trophy tops to the bases.
This part was easy.
You can do almost anything with hot glue.
Using the trophy tops themselves, I poked a hole into the top of each Styrofoam piece, filled the hole with hot glue, and then stuck the trophy top into the hole.
They stayed put and I had a nice little trophy base.


And despite the fact that they were meant to be tongue in cheek, I think the trophies turned out pretty nice.
On the party day, I displayed them with all the dignity due them. 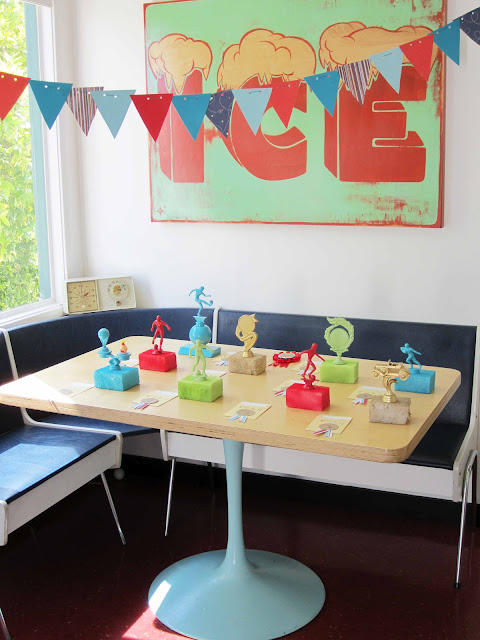 Making the Voting Ballots
The voting ballots were even easier to assemble.
I used library pockets and library cards to make each ballot.
(These are the same library ballots I used to create my business cards for my blog.  They have come in very handy for other projects.  I just love the nostalgic feel of them.)
I purchased the library pockets and cards at a Lakeshore Learning Store, but you can get them online via Amazon if you don't have a Lakeshore store or other teacher supply store near you.
(Lakeshore doesn't sell these online--only in their brick and mortar stores.  The Amazon links are provided above.)


On the outside of each ballot, I stamped the word, VOTE.
Inside each ballot was a library card with the 10 categories written on the card.
You can see all the categories here.
I hand wrote each card because I was only doing 10.
But if you had a lot to do, you could easily make 1 and photo copy it. 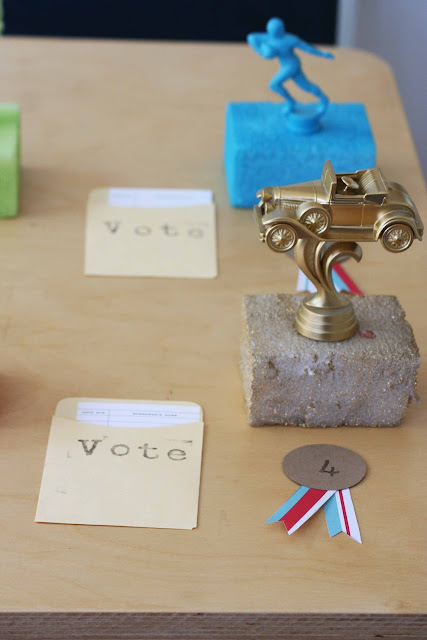 For the voting
When the dioramas were finished, each participant was given a ribbon with a number on it.
They put the ribbon next to their diorama and then all the dioramas were put on display together.
(I made the ribbons with brown painters paper, a circle hole punch, some colored paper taped to the circle, and my stamps to stamp a number on the circle.
They turned out cute and were easy to make.)


All the guests were very nice and pretended to take the voting seriously.
They humored me, the voting ballots, the spray painted trophies and the award ceremony.
Except for the 8 year old guests.
They took the voting very seriously.
There was no pretending about it.
I appreciated everyone's response to this part of the party--those who humored me and those who took it seriously.
Either way, it was fun.
And that was what this was all about. 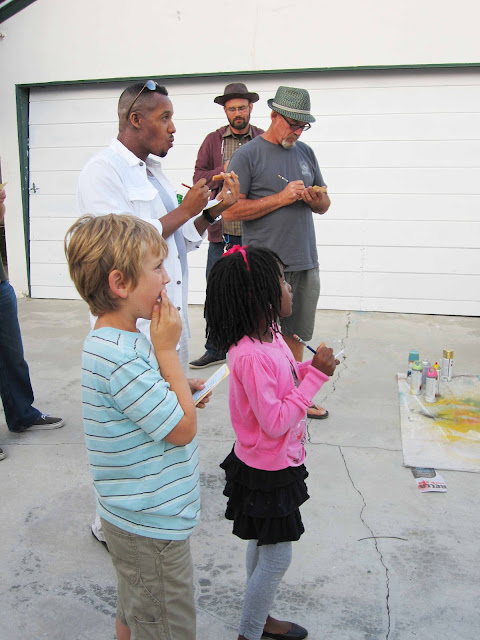 Were the participants stoked to get their trophies?
Heck yeah they were! 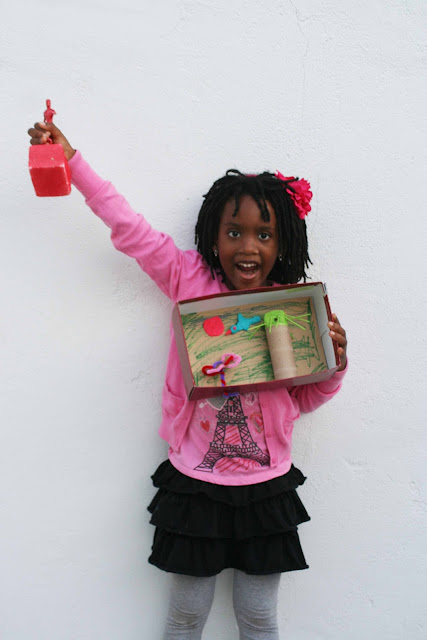 Should you make home made trophies, voting ballots and hand out awards at a crafting party?
For grown men or little kids?
Heck yeah you should!

Next up, Rhubarb Snacking Cake.
And then I have a list a mile long of other topics  want to write about.
It's summer--maybe I'll get to it!

Love those library pockets - perfect! Trophies are so fun - you are one creative wifey : )

you are so brilliant! love all of this!