How To: Make a Scuba DIver, Sea Lion and an Octopus Costume

All right, here is the info on how to make these costumes, just in case there is ever the need for an octopus costume in your future. Technical writing is not my strong point, I find it rather boring, so I will do my best.
First the scuba diver. I cannot take credit for the idea. I had saved the picture from a magazine. You can find the website here, with instructions and a materials list. They also had a lot of other great costumes.
I'll share my modifications. 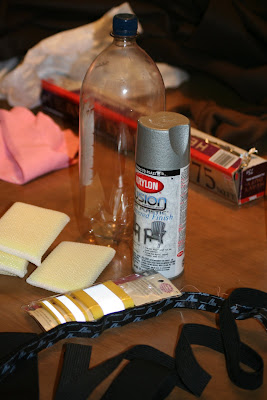 Here are most of the materials I used. They called for silver sponges, but since the store I was at didn't have any, I just got regular ones and spray painted them.
I also used a wide band of elastic for the belt and thin elastic for the straps which held on the scuba tank. I used a small strip of Velcro to attach both ends of the belt together. Lastly, I used reflective tape around the scuba tank and on the belt. I thought it looked better than the plain black they recommended. 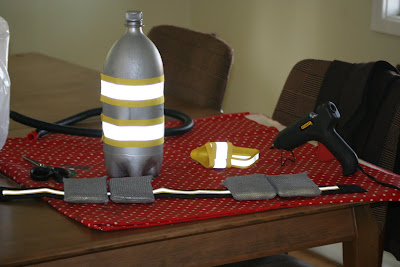 After I spray painted the 2 liter soda bottle and the sponges, I used the hot glue gun to attach the sponges to the belt. That was a lot easier than the way the directions say to do it. I also hot glued the reflective tape to the bottle and the belt. 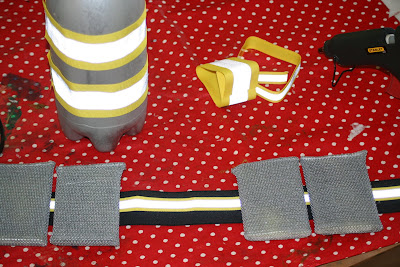 Close up of the belt.
To make the straps for the tank, I just cut 2 strips of elastic and hot glued them to the tank, backpack style.
The rest of the costume was just black leggings, a black, hooded sweatshirt, safety goggles, and the tube from an old pump we had. It was all stuff we had, except for the leggings.
James loves his costume and wants to wear it constantly. I think that is the best vote on its success, don't you? 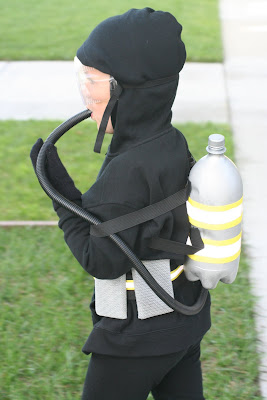 The octopus costume was the easiest. It was a quick costume to make. After searching online a bit, I decided this was the best design. You can find the directions and materials list here.
The hardest part was finding a plain, hooded sweatshirt that wasn't $25 dollars. In the end, I used a garage sale sweatshirt that had writing on it. I just turned it inside out. I also had to cut off the pocket and cut the sleeves shorter because the sweatshirt needs to be a couple sizes too big. 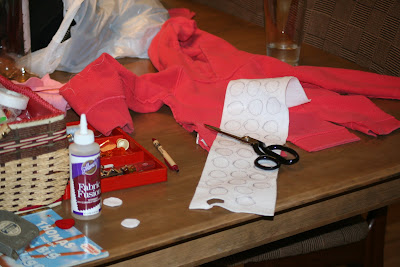 After I cut the bottom of the sweatshirt into strips, I used fabric glue to attach the sides of each "tentacle" together, making 6 all together. The sleeves made the other two. The directions suggest duct tape for this, but I found fabric glue to be easier.
They also suggested round, white stickers for the suctions cups, (the kind found in an office supply store, but I didn't think those would stay on. Instead, I cut circles from white felt and used that trusty fabric glue to attach them. 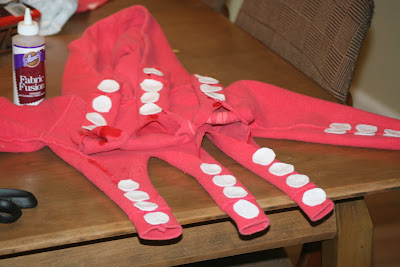 You can see here that I also used white felt and black felt to make the eyes. I added blue rick rack to the front just for decoration and Lilly wore a pair of striped leggings. In all, the costume probably too under an hour to make. 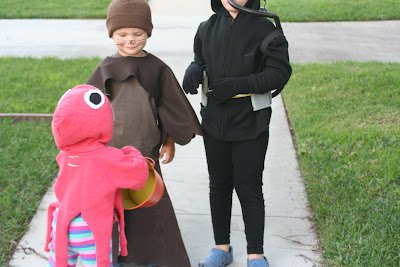 And then, the sea lion. This costume was not easy. There was not a single sample online, or anywhere else that I could find. I had a general idea of what I wanted, and figured I'd use brown felt and a brown, hooded sweatshirt to achieve the look.
Problem. A brown hooded sweatshirt was impossible to find. I looked everywhere. EVERYWHERE. In stores, online, thrift stores, asked around. In the end, the only one I found was $27 dollars and they couldn't guarantee getting it to me on time. Sooo, I improvised.
Brown beanie--$1.
We gave him a black nose and whiskers like a little sea lion.
At first, I thought of attaching flippers cut from felt to his sleeves, but you really could not tell what they were. So Aaron helped me come up with this poncho like design. You still can't really tell what it is supposed to be, but....oh well. 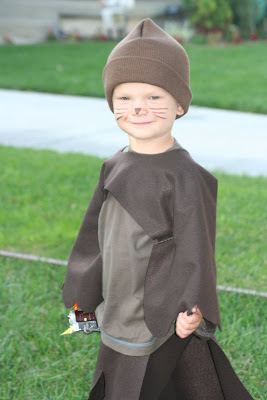 For his bottom flippers, I made a kind of mermaid tail design. I just made a front and back and fabric glued them to some brown leggings. Normally I would have sewed it on, but that would have entailed asking Aaron to climb around in the garage and find the box that it is still packed in. It wasn't the right time for that. 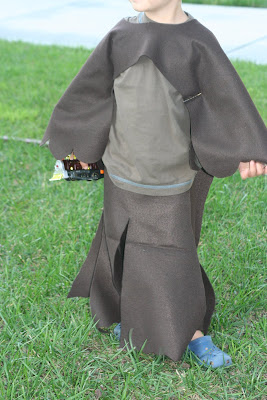 I think if I was a more talented seamstress, I would have made a whole suit with a stuffed tail and flippers. I would have made a hat that allowed just his little face to peek out. But I'm not that good.
And William like it. He was happy, and that makes me happy.
By the time we were done making costumes, the boys had already picked out costumes for the next 3 Halloweens. I guess I should get started.
Posted by Greta at 6:15 AM
Labels: Crafts, Halloween, Repurposing

Great job! the kids wore store bought Disney costumes but mine and Art's were homemade so it all balanced out!

Seriously... These are so awesome. I am planning on making my all three of my kids' costumes next year. This year I could only manage Eleanor's. I purchased the boys' costumes online (but at least I had an awesome coupon!!!) I can hardly wait to share :O) they all love their costumes, which makes it so, so, so much more fun.