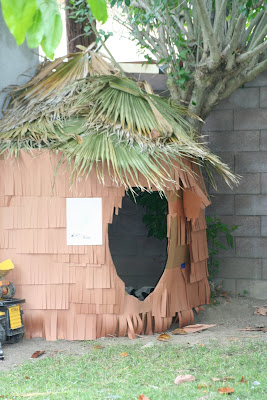 When your son asks you for an Ewok birthday party, of course you will say yes and then you will scour the Internet looking for ideas and come up empty handed.
The Ewoks are a sorely under -represented Star Wars group.
But thankfully, you have a husband who is a creative genius and says, "we'll have to build some sort of Ewok dwelling for him."
Well, not we, but he.
Look at his handiwork.
William, the lover of all things Ewok, adored his Ewok hut.
Ewok Hut and Ewok Battle: 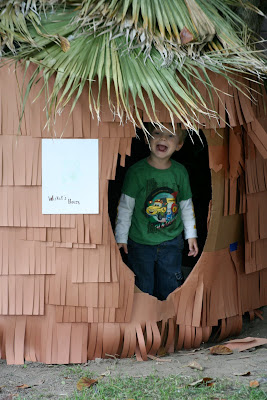 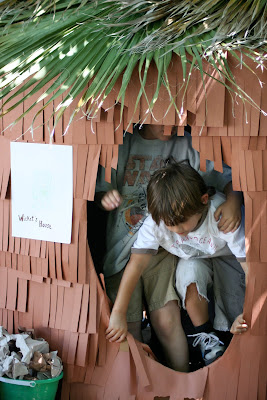 Aaron assembled it in the dark back yard, braving the possums and raccoons, finishing up about 11 pm the night before the party. He used a giant cardboard box, brown construction paper, palm fronds, a few pieces of wood and a lot of duct tape.
The kids made a bee-line for it the moment they woke up. It was such a fun fort.
And beyond being a prop for the party, we also worked it into one of the party games.
See all that crumbled up paper there, next to the hut? 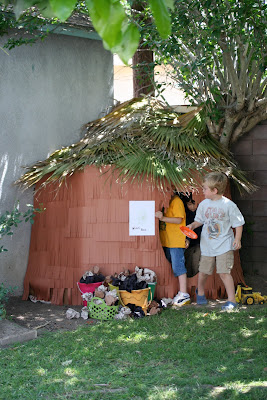 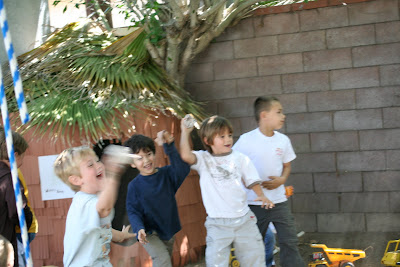 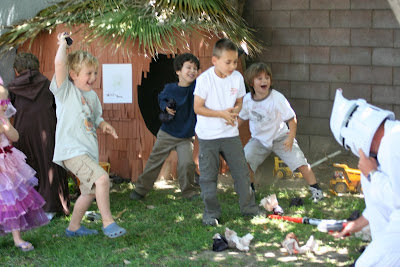 As you can see, it was a rip roaring success.
The boys loved it. Really, loved it beyond words. The looks of utter joy on their faces as they pelted the Storm Troopers with crumpled up paper rocks cannot be described. See more pics here.
I highly recommend this party game. It requires very little of you and is loads of fun. All I had to do was provide the crumbled up paper and tell the boys they were Ewoks going to battle against the Storm Troopers. Ewoks don't use light sabers, they fight with things they find in the forest, like rocks.
Our Jedi Masters kept on their white suits, added Storm Trooper masks and voila! You have a party game.
It was funny how more than one of the dads commented on how they use to have fights like that all the time. With dirt clods.
Yes, lots of crumpled up paper isn't very green, but I'll take it over dirt clods any day.
Cardboard Spaceship:
The next morning, we worried that the lure of the Ewok hut might be too great and it would be filled beyond capacity. Aaron had another box and asked if he should build something else. I suggested taping up the sides, laying down a blanket and telling the kids it was a troop transport ship. Quick and easy, right?
This is what he came up with. 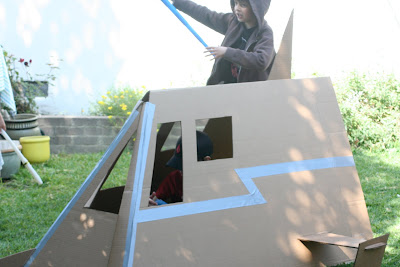 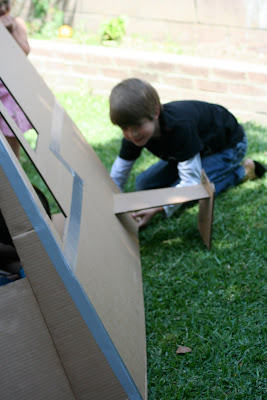 It was a great place for the kids to hang out during the party when they needed a break from the action. The littlest ones liked it too.
Here it is the next day, a little worse for the wear, but still being used and loved. 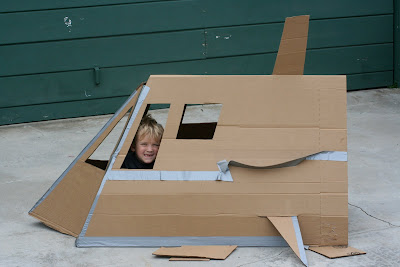 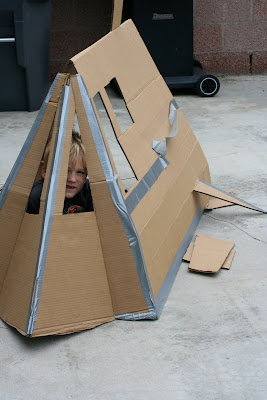 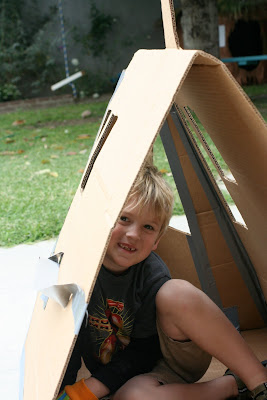 I think it is safe to say that James and William will always remember the Ewok hut and space ship their Daddy built them. I still remember my 11th birthday when my Dad came home with 11 balloons, just for me.
It is good to make memories.
And if you look in our backyard right now, more than a week later, you'll see 2 flattened, rained upon and beat up pieces of cardboard that are still being played with and loved. It doesn't take much to make them happy.
Jedi Obstacle Course:
After Jedi training, (see here) the Jedis had a chance to run a jedi obstacle course. Again, it was another simple thing that kept them busy and active and they had a lot of fun.
My boys set up the obstacle course before their friends arrived, using things we had around the house: cones, a teeter totter, hula hoops and some stools.
The Jedi Masters showed the kids how to run it and they had fun! 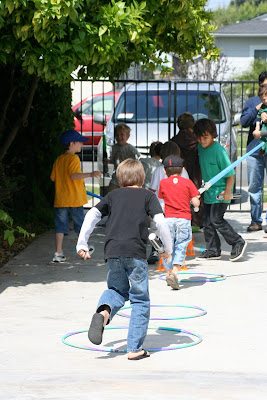 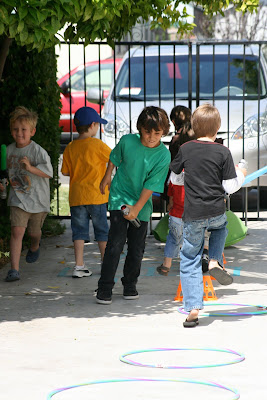 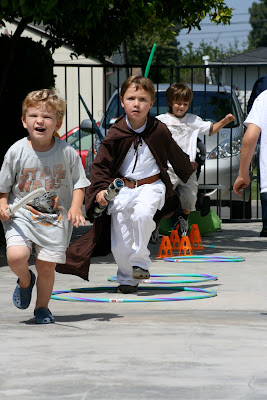 So, if you decide to have a Star Wars party of your own, or one is requested of you, fear not, the force, or at least I, am with you.
Beyond the party games listed in this post, and the decorating and favors listed here, the Jedi training described here, and the epic battle shown here, you really don't have to do much.
Just gather some light sabers and have fun.
If you want, there are some fun extras, too.
We downloaded the Star Wars soundtrack and played it during the jedi training and battle with Darth Vader. Fun and cheap.
We borrowed costumes. Our friends had the Vader costume and Storm Trooper helmet. My nephews had another Vader mask. If you have friends with sons, they are sure to have Star Wars paraphernalia you can borrow.
Aaron's space suit was from last Halloween. It is a white paper, painter's suit with silver duct tape on it.
We borrowed people, too. If you can find a friend to help out with the jedi training and battles, it will be even more fun for the kids. They'll have 2 people to fight.
We like hand made parties on the cheap. And that is what this was. You don't have to spend a small fortune to make a great party. You just need a little creativity and some duct tape.
Now, I've got to start thinking about the next birthday party. Lilly turns 2 in a month! Ahhhh!
Love from,
Greta
Posted by Greta at 10:55 PM
Labels: Parties, Repurposing

So awesome!!! Aaron deserves major props for the fort and spaceship!! Isaac loves the Ewoks too. He loves all things tiny and cute and fuzzy though. And he likes it when they fight too.
Great party, those kids are so lucky to have such talented parents who are willing to invest so much in their special day.
Love*

This is so stinking awesome and I can totally appreciate it since Art built Syd a command station for his party this past weekend. It's those little (or even big) things that really make a party and help to create memories!

Great Ideas! I featured this on my Star Wars Party Idea round-up. http://trophyw.blogspot.com/2011/08/star-wars-round-up.htmlThanks for sharing.