As a child, I dreamt of split pea soup.
Not because I was an amazing eater.
I was picky.
Annoyingly picky.
I'm sure I had never even tried split pea soup, and if I did, I probably would have hated it.
I wanted split pea soup because of this place: 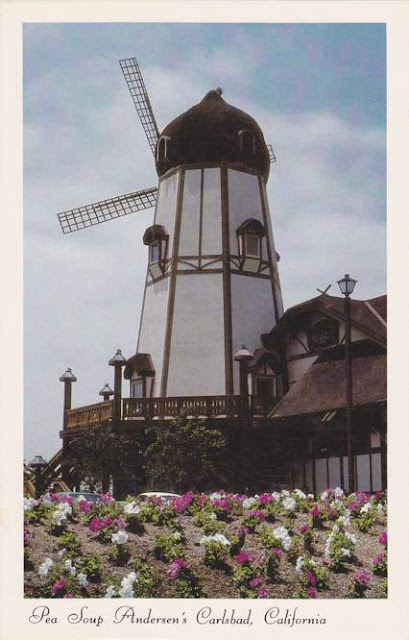 Every time we drove down the 5 freeway, I'd see it.
Pea Soup Anderson's.
The place with the windmill, the Tudor style buildings, and English cottage roof lines.
It looked different than anything in my Southern California, small town experience.
It looked exotic, and it called to me.
I guess I've always had wanderlust.
I don't know if we ever ate there.
In the way of kids, I probably never told my parents that I wanted to.
I probably couldn't formulate a way to express my desire for far off places.
Or maybe I did, and we ate there and it was so un-memorable that I've forgotten it completely.
Whatever it was, all these years later, I now like split pea soup.
I'm not picky anymore.
We haven't had much soup weather yet this winter.
We've gone to the beach far more often than we've wanted soup.
But we've just had a few days of rain, which immediately calls for making soup.
I decided on split pea.
There are heaps of split pea soup recipes around.
But I went with the best: Julia Child.
She didn't disappoint.
It turned out to be the best split pea soup I've ever had.
It just doesn't photograph well. 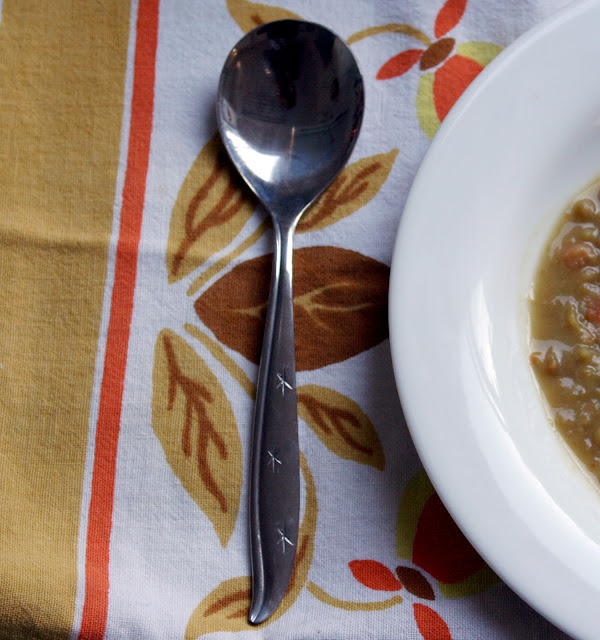 The thing that sold me about this recipe was making a ham stock for the soup.
One of my favorite parts of split pea soup is the taste of salty, slightly sweet ham.
Using a stock made from ham as well as adding shredded ham to the soup seemed like it would take the soup to the next level.
Making the stock is easy.
You start with mirepoix, that is, a mixture of chopped celery, onion and carrot. 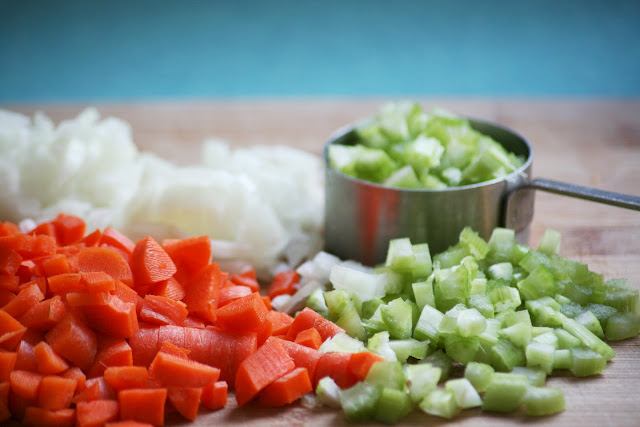 Put that together in a big stock pot, along with water, a herb bouquet and a meaty ham hock.
I used a smoked ham hock because I like that smoky flavor added to my soup. 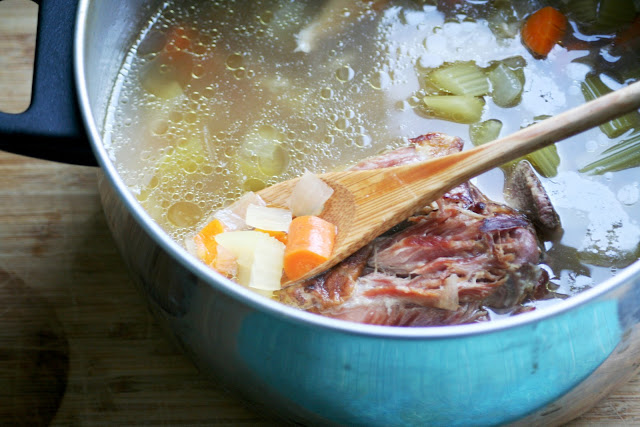 After simmering on the stove for a while, the stock is done.
If you think making your own soup stock sounds to hard, I assure you, it isn't.
Minimal effort for a big pay off.
I strained the stock and poured it into large mason jars. 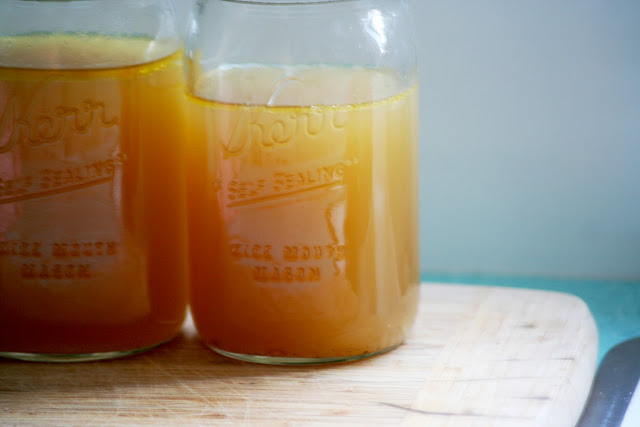 I let them cool a bit and then popped them into the fridge to use the next day. 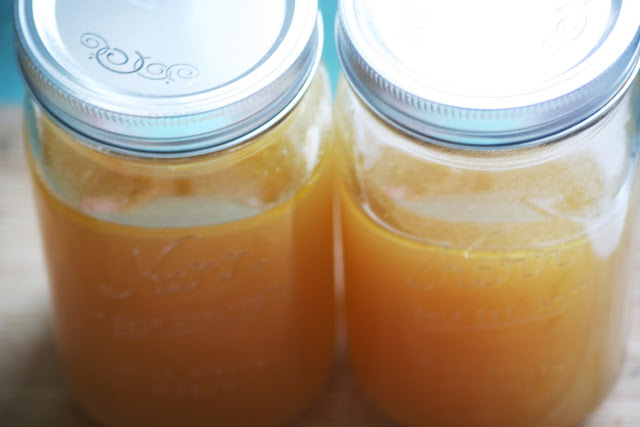 Or as it turned out, a couple days later.
This is another one of the reasons I really liked this recipe.
Storing the stock in the fridge, or even the freezer, gave me the flexibility to make the soup at a later date if I wanted.
I wasn't committed to making it that afternoon.
In fact, waiting until the stock has cooled a while in the fridge makes getting the fat off much easier.
When the stock is cold, it rises to the top in a solid "cap" and you can take it right off.
Be sure to remove that fat before you use the stock. 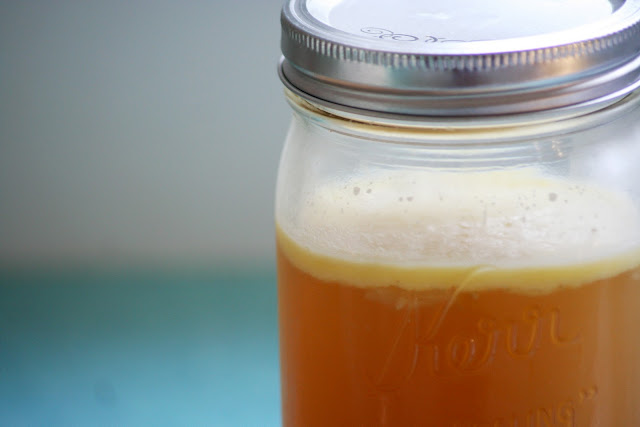 Whether you choose to use your stock right away or later, it is liquid gold.
A touch sweet, a touch salty and with real ham flavor.
You will not achieve that flavor by simply cooking your peas in water with a ham bone thrown in.
Try it.


When you are ready to make the soup, make another mirepoix and cook it in some butter.
Add flour, the stock and your dried peas.
Cook it all together for 45 minutes to an hour, or until the peas are soft.


Most people puree their split pea soup.
It makes for a prettier soup.
But I prefer chunky soups to smooth, so I only removed a cupful or two and blended them.
This gave the soup some creaminess, but kept the chunky texture I like.
You might prefer to blend the whole batch of soup.
It does not affect the flavor of the soup, just the texture.
And the way it looks.
Because this soup is the most unattractive food I have ever photographed. 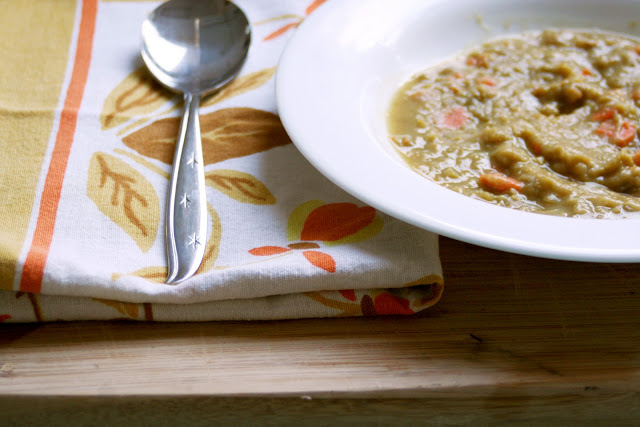 I won't tell you what it reminds me of.
But I assure you, it tastes divine.
We're expecting temperatures near 80 by the end of the week, but as soon as we get another rainy day, I'll be making this soup again.
I can't wait.
Bon appetit!
Love from,
Greta


I'd love to write out the recipe for you here, but can hardly keep my eyes open, so here's the link.
Go here.
Thanks to Kath for doing all the work for me!

Posted by Greta at 8:28 AM
Labels: Food, Recipes

Only you could write such a wonderful post about soup!

Your photos are so crazy good, Greta!

Yum! Love split pea soup. And you weren't alone in your hearing the siren call of Carlsbad's Pea Soup Anderson's! I requested dinner there on my ninth birthday! And the soup was good. What I remember most though we're all the old people with walkers and canes eating soup and rolls with those individually foil wrapped butter pats. I guess they were the only other people who wanted soup in August.
Every year after that I requested El Jardin.